Home In English Are manatees the background of Mermaid legends? 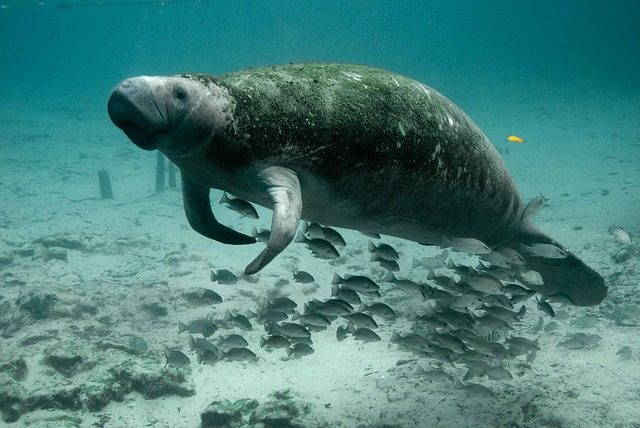 Sailors around the world thought that manatees were mermaids.

November is the month when manatees start to go to warmer waters from the coasts of North America toward South America. However, these animals often land in trouble: they are often the victims of boating collisions.

They were often the basis of mermaid legends referred by historical notes. Let us take a look at the note of Cristopher Columbus first:

“On the previous day [8 Jan 1493], when the Admiral went to the Rio del Oro [Haiti], he said he quite distinctly saw three mermaids, which rose well out of the sea; but they are not so beautiful as they are said to be, for their faces had some masculine traits.” (Voyages of Columbus 218).”

In fact, these animals often go up to the surface showing their tails. Their forelimbs and vertebrae which make it possible to turn their heads could have been mistaken for the movement of mermaids.

Now let us take another look at a note from a newspaper:

“A short time back, the skeleton of a mermaid, as it was called, was brought to Portsmouth, which had been shot in the vicinity of the island of Mombass. This was allowed to be submitted to the members of the Philosophical Society, when it proved to be the Dugong ? It was, if I recollect right, about six feet long: the lower dorsal vertebrae, with the broad caudal extremity, suggested the idea of a powerful fish-like termination; whilst the fore legs, from the scapula to the extremities of the phalanges, presented to the unskillful eye an exact resemblance to the bones of a small female arm.” ?Description of a mermaid in England’s Magazine of Natural History.

There were other notes of mermaids in the world: a cave drawing discovered in Malaysia in 1959, a text was written onto the wall of the cave: the lady of the sea. It was a 3000-year-old drawing.

In Palau which can be found in the Pacific Ocean people believe that women transform into these animals and they help fishermen at sea. They also arrange ceremonies as showing respect to these creatures.

People in Palau respect other elements of nature though: plants, birds and animals. It is probable that the extinction of these animals would endanger the tradition in Palau.

As long as there is no further investigation in the connection of mermaids and manatees, the legend remains as mystery.