Home In English Did dragons exist? 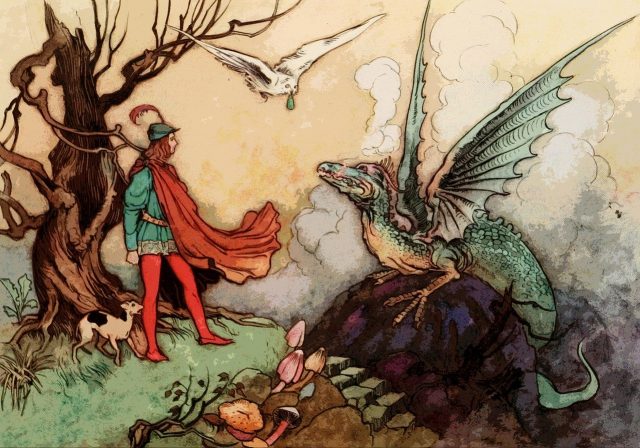 Dragons are very popular among different mythologies and cultures. Wherever we go – Asia, South America or Africa – we always find ancient sources which refer to dragons. This reference still exist today in the form of films and books.

We do not exactly know what the origin of dragons is: but it is certain that some stories talk about them as positive beings which protect people, other stories talks about them as negative beings which kill people and bring about fear and devastation. The thing is, dragons became sinister beings with the rise of Christianity: Christians referred them es evil monsters. There is also a reference to them in the Bible, in the Book of Job where dragon is identified with Satan.

The role of dragons

Some dragons also have parts similar to other animals: elephant or lion head or serpent-like tail. The body colour also varied from the range of brown to green and yellow. Another variant, basilisk also appeared during history. The word dragon comes from the greek word draconta. It meas “to watch”. Based on an explanation, dragons had to watch treasure in mountains. Here is a contradiction though: if dragons are so strong and powerful creatures, why do they need money? This treasure rather has a symbolic meaning: those brave knights who enter the mountain and oversome the beast, get the treasure as an award for their bravery. You see, they gave a challenge to people: winning the fight against them was privilige and these heroes were respected. Other creatures like trolls or elves had other roles but dragons were connected to combats.

Dragons in Europe and in Christian stories are definitely evil. They lurked around towns and their satanic plan was to attack people, bringing havoc and devastation. There are stories that Christianity took and converted into its own belief system. For instance, Saint George was a famous dragon slayer who once saved the town and a maiden from the beast. He used a cross to slay the dragon and people were rescued.

By time, killing a dragon was not a big challenge anymore. Instead, dragons became beings that people can take advantage of: according to a legend, the teeth of a dragon could help to increase an army. The first person who tried this method was Cadmus, King of Thebes.

There is an interesting thing here. It seems that stories of dragons developed independently. Each continent developed its own mythology linked to dragons. It means that the base of dragons could not be rumours and tales but the same thing that people saw in different places of the Earth. So what was this thing?

Dinosaur fossils which were interpreted as dragons? Extraterrestrial animals visiting Earth? Or were they real dragons?

One of the most convincing theory blames dinosaurs. Some physical evidence contributed to spreading of such belief: huge bones were unearthed time by time, people discovered remains of giant beings while they were all astonished. They may have thought that these remains belonged to such evil creatures as dragons. It is understandable because they did not know about dinosaurs. They needed some kind os explanation to these giant bones. The look and the habit of dragons also varied: some people believed that they had huge wings and they could fly. Others do not. Dragons could breathe fire, others could not. Some dragons lived in a cave, others lived in swampy areas. However, it is also possible that some types of dinosaurs still exist and people mistook them for dragons. Think about Loch Ness Monster, Bigfoot or Mokele Mbembe. They might not be monsters but animals believed to be extinct millions of years ago. There is actually a documented case when people misinterpreted dinosaur fossils. Chang Qu was a Chinese historian who found dinosaur fossils in the 4th century BC. The fossils were found in Sichuan Province. If we take a look at some fossils like stegosaurus, its armoured plates and spikes can easily be interpreted as body parts of a dragon.

Another animal that could have been the reason for dragon sightings is the Nile crocodile. People used to swim across the Mediterranean to reach Italy and Greece. Areas around the Nile and the coastline of North Africa is the habitat of this giant crocodile. Is it possible that this repitle is behind the scenes?

There are other possible explanations on dragons which blame other animals like the goanna which is a predatory lizard and lives in Australia. Goannas may produce venom and has deadly bites on its preys. Whales are also blamed for dragons. These animals leave enormous bones behind after they die. When people found them they could believe that it had belonged to a demonic animal.

Not all theories focus on animals though. According to anthropologist David E. Jones, dragons are the results of our fear of predators. Our ancestors stayed away from dangerous animals and this fear was programmed into or genes which appeared in folklore in the form of stories, presenting dragons as evil, cruel and fearsome animals just like the ones people were afraid of.

The origin of fire

You could ask where the fire comes? According to the belief, the dragon – Satan – comes from hell. Since this place is associated with fire, blowing fire became a trait. The dragon’s mouth was the mouth of hell, the entrance to this place. It was also depicted by several painters: Hieronymus Bosch was one of the painters who emphasized the connection between the dragon’s fire as hell. It was also a reference to dragons as being evil or satanic.

Do they exist today?

So do dragons exist? If they exist, we should have already taken a photos of them, in the era of smart gadgets and satellites, shouldn’t we?

The statement that dragons do not exist today is not completely true. There is a certain type of dragon that does exist: sailors returning from Indonesia have reported a mysterious, reptile like animal. It is no other than Komodo dragon -which cannot blow fire though, it can be deadly and dangerous. There was also a belief that the Komodo dragon’s bite is lethal as it contains toxic bacteria but this belief was debunked in 2013: a research showed that the mouth of Komodo dragon is not more dirtier than any other reptiles. This animal migh make up for real dragons.