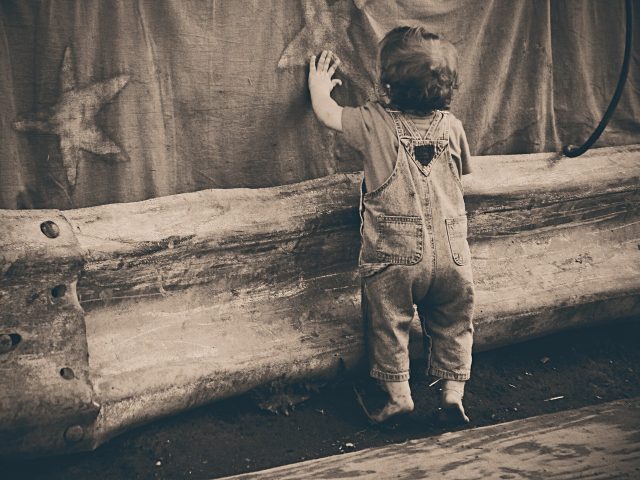 Children have different attitude to the world. They are more playful, they are more open minded. And they have richer imagination. Does it mean that being open minded open up gates towards things which cannot be perceived by adults? We like to think that things we cannot see do not exist. Still, we accept the existence of particles, atoms and molecules even though we cannot see them. Because we keep an open mind.

But what about children? They do not know much about sciens as they have not beet to school yet but they do experience things and they follow them. There is another important thing here: they are not poisoned by the cruelty and malice of our world which means that they listen to their heart. They are not distracted by the outer world, they just follow their pure experiences.

My question here is that would being free from all distractions could give us a sharper vision? A vision that could see a tiny part of the otherworld, the world of spirits?

If children are able to sense the world without distractions, it means that these senses must be sharper and clearer. Just like an old analogue TV channel: if there is a storm, the signal can be scrambled or distorted. That is the same with growing up: there are more and more distractions as the child is growing up, turning this supernatural vision down until it gets turned off completely.

I think there might be a significant difference between adults and children in terms of sensing: their senses must be much powerful because they are not restricted by social norms, ethics, rules and customs. They are not confined in the world of adults, they think more freely, they creativity and imagination is flying.

And what do we do? We think that Charlie, who the child is playing with is nothing more than an imaginary friend meanwhile it may as well be a ghost or a spirit – someone who can be perceived by this free and undisturbed vision.

Signs that there is someone

What are the signs when children can sense ghosts? But what are the visible signs of a baby or child who is capable of seeing ghosts? To answer this question, let me ask something first: have you ever seen babies or toddlers watching something for long time just like cats or dogs, glaring into nothing? Exactly: it is possible that they see something there. Or someone. Let us see some simple signs first: if he or she is often watching something, to a certain point where there is nothing to see. It is more suspicious if the child is following something with his eyes. Further sign can be talking to or playing with somebody.

A psychologist would say that it is normal and there are natural causes behind this phenomenon which is linked to brain development. But what if we put this statement aside and we suppose that there may be something, that we cannot see there? Because we are not mind readers, how could we know what that particular baby is watching?

Sometimes it might be worth asking what they are seeing or hearing. Whatever the answer is, it might be better to accept it or to ask further questions. If we are worried, we can ask about this friend but we should not force them to answer. They will manage it. Or if we are worried, it is better to find a psychologist who approaches this thing from a different direction and helps to solve it.

Are they good or bad?

Furthermore, children are honest, conscientious, straight, sincere, trustworthy and loving beings which means that they supposedly attract spirits with the same attitudes: usually playful, loving souls. Sometimes we can hear stories about malevolent spirits around children but it is possible that it is linked to the child’s emotions and situation. Domestic violence in the family could attract negative entities. Sadness, unhappiness can attract spirits with bad intentions as well. But whatever the intention of a spirit is, based on some stories, children accept their existence naturally: they do not question their origin, their world, their existence.

They just chat and play with them. Or is it possible that these friends have another intention than playing? What if they do need help and they try to express themselves or give hint by games hoping that the child will get the message? Could adults help the spirit in situations like this, using the baby as a messenger? The problem is, even if they could, we do not know much about spirits and the otherworld. So it may be the best just to talk about it but not to try it.

Children are said to be good analysers. They are able to tell what people are like, they can often read our mind. This ability can be utilised by children when they see ghosts feeling their intentions. They would probably not play with an evil soul but they would be open towards kind and nice spirits.

Take it or leave it?

Now, let’s say they do see ghosts. Is this something that they should grow out or something that we should help to improve? What happens is the former one: we bring them up, closing these senses until they die out completely. But what if we left them to improve? Could children keep this miraculous ability? But most adults simply refuse even the existence of ghosts, closing the gates, leaving these beings out, closing the gates of these senses. But as long as these gates are open – usually until the age of 7 – they may visit some children. I can even imagine that our ancestors had a different kind of education where this supernatural ability – if exists – was not turned down and people could see otherwordly beings such as spirits who they considered angels or demons.

Of course, all of this does not mean that children cannot have imaginary friends. We just need to be able to disinguish these two things. Because how certain can we be that their imaginary friends are really come from the world of fantasy? Bear in mind that they might be souls who just want some company. Children are excellent mates when it comes to playtime and since they are the only ones who can sense them, spirits do not have much choice. If adults could also sense them, they would probably turn to us to ask for some help.

An obvious sign that the imaginary friend is a ghost is when children tell us things that he or she normally would not know. If they ask about how uncle John is after his accident which we have never mentioned, that could be suspicious.

It is is assumed that we all have supernatural abilities like communicating with the dead but we do not know how to turn it on. Babies possibly do. So there is a lot to learn from them.

Image by Ryan McGuire from Pixabay