Home In English Mysteries of the Universe 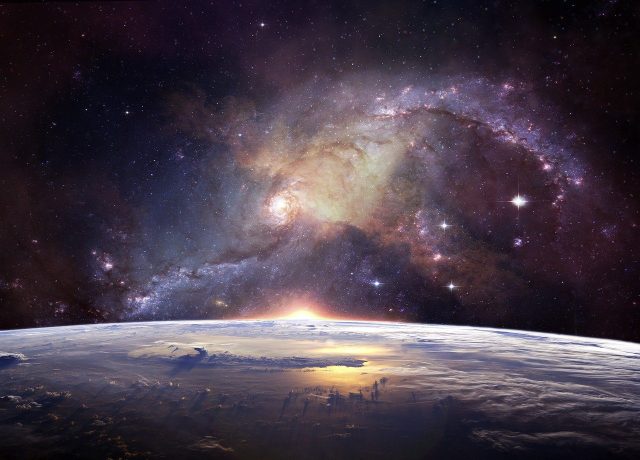 What was there before the Big Bang?

It is widely argued what there was before the Big Bang. According to scientists, the Universe has always existed but space and time appeared after the explosion. But what was there before the explosion? Nothing? Singularity? Or something else?

The cosmic microwave background radiation is significant radiation that gives some clues to scientists about how old the Universe is. This radiation is basically the imprint of the Big Bang.

However, there are patterns in this radiation which give a hint about the state before Big Bang. According to some astronomers, there could not have been a vacuum before the Big Bang.

A theory goes on saying that if everything – space, time, matter and light were accumulated in a single point, there must have been something outside this point.

The main reason which supports this idea is that something must have started the chain reaction of events, leading to the biggest explosion ever. There must have been something before Big Bang and not only an empty vacuum.

Based on an explanation, it was antimatter that may have been responsible for the explosion and the expansion later.

Some gravity waves appeared at the beginning of the Universe while it suddenly started expanding. After analysing these gravity waves, scientist has already found traces of another Universe which had existed before the Big Bang. So is it possible that our Universe is not the first Universe and there had been other worlds before it?

Is it also possible that there were more Big Bangs in the past, as a part of chain events? If that is the case, our world is not the first but we do not know how many of them there had been before. Can it be an infinite circle? After a long expansion, it may have collapsed; could it have gone back to a single, concentrated point when the explosion happened again?

If this event repeats itself, there could be regularity or order behind the process because it happens repeatedly. Is it possible that the Univers fixes itself or tries to be perfect each time the Big Bang occurred? Further research is needed but this conclusion may be upsetting.

If we say that there was nothing before the Big Bang, nothing is still something that exists. Here is another problem: we have difficulty interpreting specific terms.

What caused the Big Bang?

One of the most exciting questions is what induced the Big Bang? What was the point when the Universe started expanding?

The development of science sometimes proves the existence of some kind of higher intelligence. The Big Bang Theory does not exclude the Theory of Creation. The former only explains how the expansion happened. By not explaining why or how the explosion occurred, the Big Bang Theory maintains the possibility of the existence of a Creator, even divine intervention. Nothing happens without reason.

It seems as if someone spread the seeds of the Universe, leaving it to be born. Does it mean that our world is determined? Is our Universe created for some purpose? But who made it? A non-material, divine being, who is responsible for our existence? If that is the thing, this entity must be wise, astute and prudent. It must also be very intelligent because in order to create such a complex Universe like this, it needs enormous capability of creation.

Think about fundamental physical forces or the ecosystem: however complicated these systems are, they do not collapse. Everything has its role; there are no unnecessary things. Does it mean that our world is the result of an intelligent design?

Someone may have sat down at a desk and designed something. Or, there may have been more designers. All the living entities, planets, star systems, physics – they are all intricate systems. To create such complex things is an arduous task – even computers could not make such models.

We do not know for sure how big the Universe is. However, scientists have already created computer models to answer this question. Surprisingly, these models showed that our Universe was not infinite and estimated its width which is 78 billion light-years. However, there is still a way to make it infinite: it is theorised that the border is curved. As a result, the Universe may look like a bubble and we can never get out of it.

Just imagine your computer screen with a character going towards the right edge of the screen, leaving it, then reappearing on the left side.

One thing, however, is for sure: since our Universe is expanding continuously, after a few decades, its size will reach 90 billion light-years.

But if there is a border, we will probably never know what there is outside. This is, however, a very intriguing question.

When we look up at the sky, we see the past because the light coming from distant stars needs thousands or millions of years to reach us. So it is possible that the star you are looking at is not there, in fact. If scientists want to take a look at a more present state of the Universe, they have to look as far as they can.

A satellite called NASA Wilkinson Microwave Anisotropy Probe (WMAP) is able to see highly far when the Universe was only 380 thousands years old. This satellite is able to measure the microwave background radiation with its sensitive devices.

Living in a simulation

Those who suspect intelligent design behind our world think that we may live in a simulation. It does not necessarily the same as virtual reality but like a real, cosmic, physiological simulation. So the question arises: what happens if the creator is fed up with the simulation and decides to put a stop to it?

The simulation theory believers think that this is not the first simulation and there had been several others before, each of them started with a Big Bang.

So when the end of our world comes, everything collapses into a single point again so another Big Bang can happen.

If this simulation was started and stopped more times, why? Do they want to simulate this world in order to check the results and compare them with other simulations?

If that is true, it is distressing to be aware that we are not in control of our destiny and we only exist inside this cosmic simulation. As for what is there outside it, we will probably never know.

According to some Simulation Theory believers, some paranormal activities can be explained by the theory. They consider these occurrences errors or glitches in the system – which means that the system is not perfect even if it was designed but a high intelligence. Some other believers think that paranormal occurrences are intentional phenomena created by the creator itself to give a hint about its existence.

The question of whether how close we will get to the Creator or God depends on the future. But there is one thing for sure: we will never learn anything about the higher power if it does not want us to do that.

Image by Lumina Obscura from Pixabay