Home In English Secrets of Antarctica 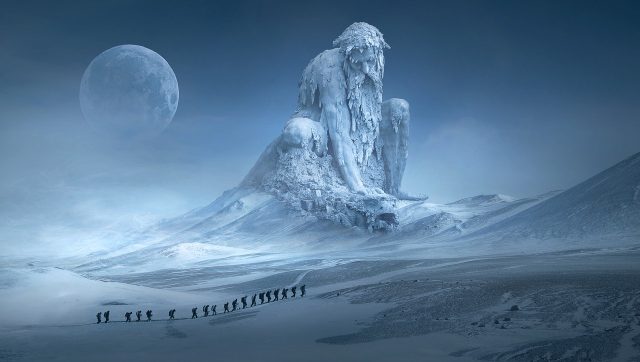 There has always been a legend about a mysterious civilisation in Antarctica. Some people believe that deep beneath the ice lays the ancient ruins of the mystical Atlantis. Others think that not even ruins but also traces of another human species can be found there.

Some people believe that the traces of the lost civilization mentioned in Sanscrit texts could be found at Antarctica.

According to another theory, Antarctica may hide a Nazi base which was built during the Second World War to help the Germans to win the war. It is said that the Nazi leadership knew that the icy continent hides something. However, it is not confirmed that the Nazis ever found evidence for an ancient civilization. Hitler’s plan was to gain an otherworldly ancient technology to reach his goals. Is it possible that they found something but never could integrate it into their weaponry?

Some reports claim that they found ancient artificial caves, spaceships and ruins and that they were able to build an aircraft called Haunebu which operated with antigravitational propulsion. If it is true, by mass production, they could have won the war.

But what happened to the ancient, possibly extraterrestrial ruins at Antarctica? Some believe that after the war Americans took control over the polar territory and they continued the search. If it is true, what have they found? It is theorised that whatever there is, it is kept in secret because we are not grown to understand such technology yet. Revealing a highly advanced ancient technology could have disastrous consequences: we could even destroy ourselves.

Some people claim to have seen huge structures which are sometimes very long while others are densely positioned. The existence of these structures has also been backed by geological research. One of these structures is 300 meters long and is said to be surrounded by a 10 meters tall wall and the ruins are very close to the surface. Dome-like structures were also found by Google Earth. Moreover, pyramids are occasionally seen from satellite images. Some are even bigger than the Great Pyramid in Gizah. Another reason why these structures are considered artificial is the presence of quadrants. If we think about it, rarely do we find quadrants in nature. So are these man-built structures or natural formations? If they are artificial, who and how did they build them?

There are also rumours about skeletal remains of a short human species. Could they have been the members of this lost civilization? Were they from our planet or from somewhere else?

There is a slight possibility that life was different at Antarctica in the past: some scientists think that climate was much warmer there 100 million years ago and the continent was covered by green forests.

Is it possible that an ancient civilization lived there in the past? If it is true, it could answer a lot of things about the history of humanity. Some believe that governments know about them and there are reports on soldiers guarding some areas and secret research facilities in Antarctica. There are also reports from climate researchers who allegedly saw traces of digging and mining. As if they were looking for something underground. Is it possible that somebody hides something there?

As ice is melting continuously, it is possible that sooner or later it will reveal something that will undoubtedly tell more about our past.

Image by Stefan Keller from Pixabay