Home In English The Theory of Spirits: the haunted Malahide Castle 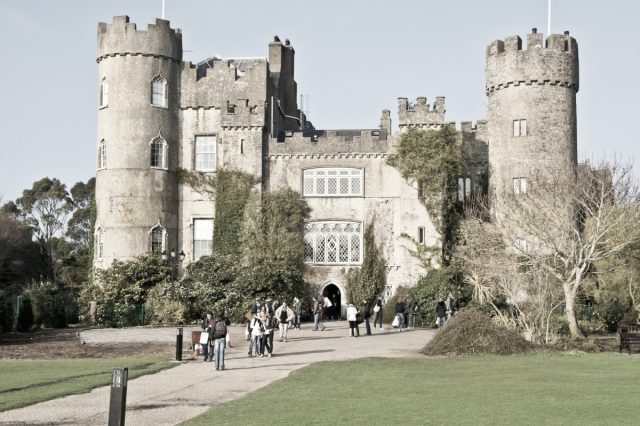 The castle is almost ten miles north of Dublin, Ireland.

The first owner of this property was Richard Talbot who took it into his possession in 1185. Richard was a knight and he lived there with his family. However, during the conquest of Oliver Cromwell, the property was given to Miles Corbet. After Oliver’s failure, Miles was executed and the ownership of the estate went back to the Talbot family.

Two towers were built for the castle in 1765. Later, the place was used by the Welsh army in the First World War.

Rose Talbot received the ownership of the castle in 1973 but she sold it to the Irish State in 1975 because of financial reasons. The castle was sold with all of its furniture.

The castle is haunted by more spirits. If I should find a link among these spirits, I would say they experienced a horrible emotional trauma before their death. The trauma probably keeps them here, in our physical world. These spirits are trapped in our physical world by such emotional trauma I call residues or residual spirits. They are also spirits but trapped spirits.

The first residual spirit belongs to a soldier, Walter Hussey. He died in a battle on his wedding day in the 15th century. He is wandering about, agonising and sometimes pointing at his wound on his side caused by a spear. His death must have been violent and he still does not know that he died. However, my theory is that he could not say goodbye to his beloved fiancée and this failure put an unbearable trauma on him, which still keeps him here. If he knew that all his loved ones passed away a long time ago, he would finally rest in peace. A medium delivering him this message could be his cure.

The second residue belongs to a person called Matilda Plunkett. She sometimes appears in front of guests and workers. According to legend, she is looking for her fiancé. Just like in Walter’s case, she may have also suffered an emotional trauma that keeps her there.

The third trapped spirit belongs to a man called Puck, who was a comedian and he was in love with Lady Eleanor. Henry VIII put her into jail at the castle because she was accused of provoking rebellions. On a night of December, he was found stabbed on his chest but it is not clear whether his relationship with Eleanor had anything to do with his murder. Before he died, he promised that he would haunt this place until a master and his bride rule the castle. However, I could not find out what he meant by that. Nonetheless, he also promised that he would not hurt anyone at the castle.

As we see, he was also experiencing severe emotional trauma while dying. Interestingly, however, staying in our physical world was seemingly his own decision. Could it be evidence that staying in the physical world after death can not only be triggered by serious trauma but can be intentional as well? Some visitors have reported seeing the face of a comedian on some photos taken there.

The fourth being is called the White Lady. This is actually a painting of an attractive woman dressed in white, walking on the wall of the castle. This lady in is said to leave the painting sometimes and stroll around. I am not sure however that this is actually a trapped spirit. If it is connected to the painting, it is more probable to me that it is a remnant – a pseudo-image of the mind of a person -, materialised by the feelings of either the painter or the lady herself. She has some kind of limited consciousness and has permanent interaction with the painting.

The fifth entity is Miles Corbet. As I mentioned earlier, he was given the property by Oliver Cromwell. However, he could not enjoy it for a long time because he was executed for his crimes after the rebellion. He is sometimes seen as a soldier, walking around at the castle then falls into pieces. From my perspective, it is difficult to say whether he is a residual spirit or a remnant. It is certain, however, that he experienced a violent death. There are two possibilities here: either he is still seeking for justice – in this case, he is a residue – it is his remnant as he grew love into this castle and his feelings interacted with the walls of the building. A medium could answer this. So they could finally rest in peace.

Image by William Murphy. This image was originally posted to Flickr by infomatique at https://www.flickr.com/photos/80824546@N00/5549518243. It was reviewed on 3 April 2011 by FlickreviewR and was confirmed to be licensed under the terms of the cc-by-sa-2.0