Home In English How were the pyramids built? 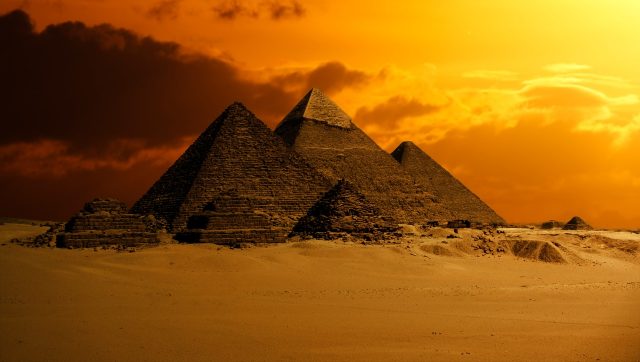 The blocks of stone that make up the pyramids weigh several tonnes and no one knows how they could have been moved or transported from hundreds of kilometres to the site where they were built.

Construction is believed to have begun shortly after Hufu’s accession to the throne (2551 BC) and lasted for about 20 years. Consequently, the builders had to transport some 125 000 blocks of limestone, cut and polished, to Giza each year and work them into place.

Many theories have tried to explain it, none of which have stood up to the theoretical test! How were these masterpieces really made?

The pyramids of Giza are three pyramids: those of the ancient Egyptian pharaohs Hufu, Hafre and Menkaure.

There are many other pyramids in Egypt, including pyramid monuments dating from before the age of the pyramids.

These and many other similar archaeological finds suggest that the technology to build pyramids was available to mankind before the Great Pyramid of Giza.

Yes, but historians say that at that time, thousands of years before the great pyramid and the sphinx were built, there were no large group societies of human beings.

This means that part of these pyramids pre-dates civilisation, which mainstream archaeology says is impossible.

Many also believe it is impossible that these huge pyramids were built by Egyptian civilisation without outside help. Engineers have calculated that an immense number of people would have had to have been involved in the construction over a huge period of time, which is unthinkable even today.

Moreover, the people of that time did not have the modern tools that today’s architects have.

Many people cannot cope with the idea that the Egyptians could have built such huge buildings without modern tools, using simple tools, and so they resort to other explanations, which are even harder to believe.

How they were able to transport several tons of stone hundreds of kilometres away and then lift it into place using the technology that the ancient Egyptians had around 4500 years ago?

How could they have used their primitive tools to carve and fit blocks weighing several tonnes together so precisely?

The Great Pyramid of Giza originally consisted of 2.5 million blocks of stone, averaging one cubic metre by two tonnes. There are also much larger and heavier blocks, some weighing up to 30-40 tonnes.

The other pyramids of Giza are not much further apart.

The biggest mystery, of course, is how the two-tonne stones managed to be dragged into place across the desert and lifted to hundreds of metres in height.

There have been several theories about this, some suggesting that they may have been floated down the Nile, others that they were transported on huge structures.

Let’s not forget that we are talking about blocks weighing on average 2-3 tonnes, in extreme cases up to 30-40 tonnes, and moving them is not easy, even with today’s machinery…

The blocks were not transported?

Many people wonder how those heavy blocks weighing several tonnes were transported. But what if they were not?

According to a theory created by a team of architects say that the stone blocks of the pyramid may not have been transported there, but may have been made there in the first place.

In other words, the stone blocks of the pyramids were cast from ancient concrete, on site.

After analysing samples of material taken from the pyramid and its surroundings, they concluded that the blocks were not carved in the surrounding quarries and then dragged into place, but simply moulded on site. What is more, organic fibres were also found in the stone samples which could have been human hairs.

Does it mean that the stones that make up the pyramids were not carved, but cast?

This is not a coincidence and, according to ancient alien theorists, the pyramids may be linked to lost – possibly extraterrestrial – civilisations from which the Egyptians may have borrowed their knowledge and astronomical skills.

Nobody knows, but it is certain that the pyramids deeply guard the ultimate secret that may be connected to their construction and the aliens’ visit to Earth, after all, we never know what the ultimate secret is that will hopefully be revealed one day.

The technology of Gods

There is evidence that ancient Egypt used a technology tens of thousands of years old that was far ahead of its time.

In fact, there has never been a single person or civilisation on the planet that possessed a structure like that of ancient Egypt.

There are countless finds that suggest that Egypt was blessed with prehistoric technology, presumably by the ancient gods.

This technology probably did not use electricity or any other artificially produced energy or energy carrier, although in Egypt they were well aware of what electricity was, as it was used in some places.

Numerous reliefs bear witness to this, and vases have even been found that once served as ancient batteries.

There must have been a missing technological link that was discovered or acquired by the man of the time.

The technology of levitation

Many believe that an archaeological find could explain everything we did not know about the construction of the pyramids.

An ancient levitation device that may have been created in Egyptian times or brought to Earth by ancient astronauts is also believed to be the key.

This device could supposedly use sound waves to create resonances that could lift objects into the air and hold them there. It is thought to have worked on the principle of acoustic ultrasonic levitation.

Remains of several such devices have been found in Egypt.

They may have been used to lift the tens of tons of monstrosities, monoliths and blocks of stone that made up the pyramids.

Many believe that Edward Leedskalnin, the once mysterious inventor, also worked on a project to decipher this ancient Egyptian technology, with success and this is how he single-handedly built a castle in Florida out of several tons of stone blocks.

However, it is still not known how he did it but rumour has it that he used sound waves to lift the heavy blocks of stone.

The rest of the monuments

There are still a lot of archaeological finds out there which have not been explained, or at least the manner of their construction is in question.

Stonehenge, or the stone heads on Easter Island, and many other monumental works are made of stones that are a mystery as to how they were moved to the site, sometimes hundreds or thousands of kilometres away.