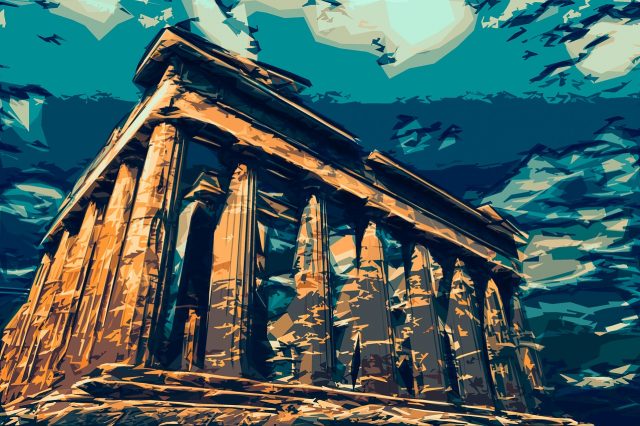 Ancient Greece has many mysteries and questions. The anthikuterian mechanism, the role of Gods, legends of Troy are all unanswered questions. Nonetheless, there are signs that they were a highly advanced civilization guided by Gods. Or were they Gods?

The Gerry Villa Museum can be found in Los Angeles, California. In this museum, visitors can take a look at an ancient greek relief which has caused a lot of debates among scientists over the decades. The relief was found in the 1970s and is originated in 100 BC.

At first look, it may seem like a nice relief but is you take a closer look, few things will seem quite extraordinary. One of the figures on the relief seems to be holding some kind of electric device or a computer. According to some more wild assumptions, it can be a laptop. Can this discovery prove that the Greek culture was visited by extraterrestrials, giving modern technology to them?

The unknown device has a striking similarity with a laptop. Not only its screen is shown but its keyboard as well. Sceptics claim that this is not a laptop but some kind of chest or an ancient scripture os a book.

Perhaps another ancient wonder can reveal more things about this mysterious Greek technology. Dascalio is a tiny island on the Aegean Sea. On this island, a huge pyramid was carved out from a mountain representing the beauty and the power of the Greek civilization. To build up this pyramid, whose stones were transferred here from Naxos which is 10 km away. Again, there is a pyramid here, just like everywhere else in the world. Why were pyramids so significant? What was their true purpose?

As for the technology of this culture, scientists have found traces of craftmanship and metallurgy which prove that this area was technologically improved. On this island, a water pipe system (possibly with a sewage system) was also found which was constructed 1000 years before the water pipe system in Knossos. Did the ancient Greek invent this technology on their own or did somebody else help them?

The Mystery of Keros

Keros was the biggest settlement of Dascalio. There is another mystery: thousands of statues were found in Keros depicting humans. These statues however, were intentionally destroyed and transferred to this island. Who destroyed them and why? What did these statues truly represent?

Based on archaeological research, the building and the maintenance of such an enormous settlement took a lot of effort. Despite the need for importing food and metals, people did not leave this place until 4500 BC. What kept them here and what was so attractive that kept these people here despite the lack of supplies?

What researchers have found underground were grape, olives, lentils, almond and other crops like whey. Most of these products were imported.

Too advanced technology, not enough people

Metallurgy had a big role here. Scientists found two workshops and industrial rubbish. Lead axe, brass tools, ceramic tools and clay furnace were also found here. According to researcher Michael Boyd (University of Cambridge), evidence proves the presence of professional metallurgy here but interestingly, not many professional workers lived on the island because the supplies and raw material was very limited. So how were these people capable of maintaining such an advanced civilization then?

According to Michael Boyd, agricultural production was spreading and buildings started to become huger and the role of shrines went to the background. Does it mean that the role of religion started to become weaker? Did people turn away from the Gods? Turning to something else? Perhaps extraterrestrials?

A more realistic explanation can be one of professor Colin Renfrew. According to Colin, the reason why this area was so popular and the centre of the development is that it was a natural bay with a spectacular view of the Aegean Sea.

Image by Denis Azarenko from Pixabay