Home In English The Antikythera Mechanism 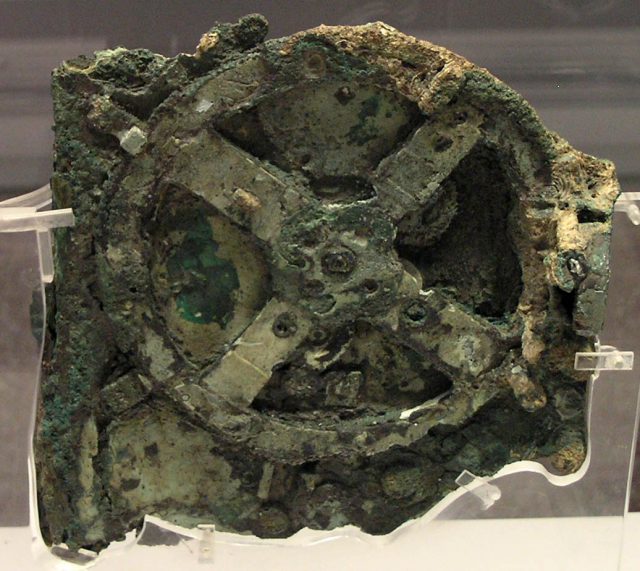 A few decades ago, a mysterious astronomical device was discovered between the islands of Peloponnese and Crete, somewhere in the Aegean Sea. The object, which has been dubbed the Antikythera Mechanism, is one of the few objects in the world that could not possibly exist. The origins of this object raise many questions. Who made them, why, and when?

It was found in the deepness, covered by thousands of years of rust. The mechanism was discovered on 17 May 1902 by fishermen in the waters off Crete, at a depth of about 40 metres in the sea, in a Roman shipwreck that sank in the 1st century BC.

The artefact was excavated later that year and examined by an archaeologist named Valerios Stais, who then purchased it for the National Archaeological Museum of Athens.

For decades afterwards, the find was ignored because it seemed too complex and too elaborate to be contemporary with the other artefacts recovered from the wreck. Without any analysis, it was labelled as modern-day waste, when it was much more than that.

The scientist pointed out that bronze sculptures from that period were also found only in the cargo of sunken ships, the rest probably ended up in smelters.

The original structure has not been allowed to be studied abroad and cannot even be removed from the museum building. So the scientists were forced to transport the testing machines to the museum.

A total of 82 fragments were recovered, which were later dated to around 140-100 BC by later dating studies. More than fifty years after its discovery, archaeologist Derek de Solla Price, examining the main part of the structure under a magnifying glass, noticed that it contained gears.

In the years that followed, the bronze pieces were examined first by X-ray and then, as time went on, by the latest technological tools, but the purpose of the structure and the identity of its maker remained obscure.

X-ray analysis and other modern tools have revealed that the device consists of more than 37 handmade bronze gears and discs.

It contains more than 2000 characters and symbols. The front of the structure resembles a clock, with two concentric circles, one representing the Greek zodiac and the other the Egyptian calendar. The largest wheel has 27 teeth. The object is 33 cm high, 17 cm wide and 9 cm deep, it was made of bronze and housed in a wooden case.

According to the researchers, the Antikythera structure was a computer with a solar-centred, or heliocentric, viewpoint, used to calculate and model astronomical phenomena.

This was further proof that mankind had advanced astronomical knowledge and technology 2000 years ago. This is, of course, was astonishing. The press coverage was not lacking, with many researchers claiming that such a device could not have existed at that time. However, one researcher, Michael Wright, was sceptical that the model really reflects a heliocentric view.

Heavily damaged by time at the bottom of the sea, the mechanical computer bears the hallmarks of the precision and complexity of the old 19th century clocks. Even today, its exact purpose cannot be established with certainty. It was probably used in astronomy, as mentioned earlier: to make precise measurements about the sun, the moon and the planets.

Previous experiments have also shown that the mechanics could also describe the special motion of the Moon. Because the Moon moves in an elliptical orbit around the Earth, rather than in a regular circle, its speed changes several times during the month, slowing down at one point and speeding up at another.

To illustrate the accuracy of the instrument, Apple software engineer Andrew Carol built an exact replica of the mechanics of the structure in Lego and used it to accurately predict the solar eclipse on 8 April 2024.

The mechanism seems so accurate, that it was probably preceded by several imperfect prototypes. However, no such prototypes have yet been found by archaeologists.

But who made it and where? There are many explanations. Some theories suggest that Poseidon of Rhodes, a Stoic philosopher, was the inventor of the mechanism, others that it was Archimedes. Recent research has not come much closer to a solution, but it is also supposed that the inventor was Archimedes.

The mechanical marvel was probably made in Corinth, based on designs by the mathematician and physicist Archimedes. The ancient genius is also credited with the invention of the military equipment that enabled the Syracuse Greeks to resist the Roman armies that invaded Sicily for nearly two years. At the same time, Cicero mentions in one of his works a device that Poseidon is said to have made.

According to ancient writings, Archimedes was killed during the sack of Syracuse, it was stolen by the Roman general Marcellus. The device was kept as a family heirloom by the Roman family, and Cicero may have seen it as a friend.

In 2010, researchers suggested that the mechanism of the Antikythera mechanism seems to be more based on Babylonian astrology, as experts believe that the Greeks borrowed a lot from the Babylonians, including astrology and mechanical designs and solutions.

But there are also much wilder theories that the device was the work of alien beings. Legend has it that it was the much-heralded Annunaki race that introduced the human race to Earth.

According to ancient alien theorists, the human race is the creation of aliens, and they are also our gods who have occasionally visited Earth from the sky. This is where the various cave paintings, sculptures and hieroglyphs later came from, depicting huge elongated-headed creatures, spaceships and sculptures of scavengers. Aliens wanted to share their knowledge with mankind through such and similar structures.

The paleoastronautical view is that aliens have visited Earth since prehistoric times. They did so to study prehistoric humans and teach them completely new things. This is one of the reasons why humans started to make tools and later learned to read and write and the Antikythera mechanism could be the result of this progress.

What is certain is that the Ancient Greeks were well versed in the technology, and several sources mention Greek geared structures.

Perhaps more recent research could reveal even more secrets if we could dive to the seabed again.