Home In English The mystery of the Shroud of Turin 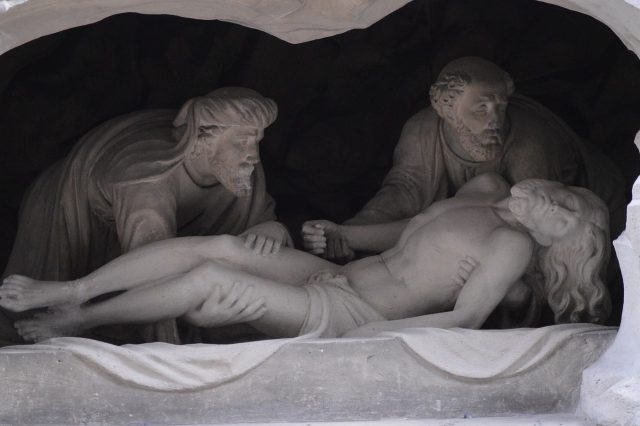 The Shroud of Turin is said to be a blanket that was used to cover and bury Jesus’s body after his crucifix. This relic has been a subject of debate among scientists for centuries. It has already proven to be authentic and a fake relics as well.

The imprint shows a man beard and injuries caused by the crucifixion. There are wounds coming from whipping and there is another wound on the head coming from a spiky wreath. The interest in the shroud started to grow when a lawyer in Turan called Secondo Pia took a photo of it on 25 May 1898.

However, laboratories in Oxford, Zürich and Arizona determined that the shroud was made about 1260 and 1300 which was a huge disappointment among believers. Even cardinal Anastasio Alberto Ballestrero claimed that the relic could be nothing more than a hoax.

Some scientist, however, object to these results claiming that the results were inaccurate because of unexplained neutron radiation coming from the shroud.

In February 2008, the leader of Oxford Laboratory, Christopher Ramsey. claimed, that the shroud might have contained dirt on its surface, producing inaccurate results. It would mean that the determined age of the shroud could be much older.

Until December 2011, the shroud was under a series of examinations by Italian scientists. It was attempted to be reproduced in Enea Laboratory. UV laser was used for the reproduction which left the same imprint on the shroud as the one on the original material.

This scientific method could support the authenticity of the shroud but others do not agree. In October 2014, a British scientist called Charles Freeman claimed that the shroud was made more than 1300 years after the death of Jesus. He said that the shroud could have been an accessory used during Easter used for theatrical performances and nothing proves that it was made before 1300.

It is impossible that his body left an imprint in the shroud and it remained there for centuries – he went on. His claims cause fierce debates among historians and experts of religion.

It is also said that the shroud was made by Leonardo da Vinci. According to this assumption, he used primitive photographic techniques to leave his imprint on the shroud. The Church, however, has also studied the material by radiocarbon and pollen analysis. After these tests, the Church claimed it to be authentic and it is his body that is imprinted on it.

Another test revealed another surprising fact in February 2017. Italian scientists claimed that the shroud contained DNA that originated from plants from different regions of the globe.

Based on the results, the shroud was made in India, was taken to the Middle East and then to Turin.

The research was done at the University of Padova. Gianni Barcaccia said that they analysed different gene samples extracted from the shroud. After the extraction, they discovered several genes which belong to different plants which are typical of the coasts of the Mediterranean Sea. There are some genes which are from the Middle East and Asia. These findings give us a hint that the shroud could have been made in India, somehow was taken to the Middle East and continued its journey to Italy.

According to this research, the imprint could have been produced by neutron radiation induced by an earthquake that occurred near Jerusalem in 33 BC. The radiation may have interacted with nitrogen atoms on the shroud and the chemical reaction may have caused the imprint.

As we see, the results of examinations and tests are not conclusive. Perhaps belief and rational thinking should not be mixed up. Belief often gives the explanation for the unexplained and there is nothing wrong with that. So the question that the shroud is real or does not matter.

Image by Dorothée QUENNESSON from Pixabay