Home A múlt rejtélyei The secrets of Codex Seraphinianus 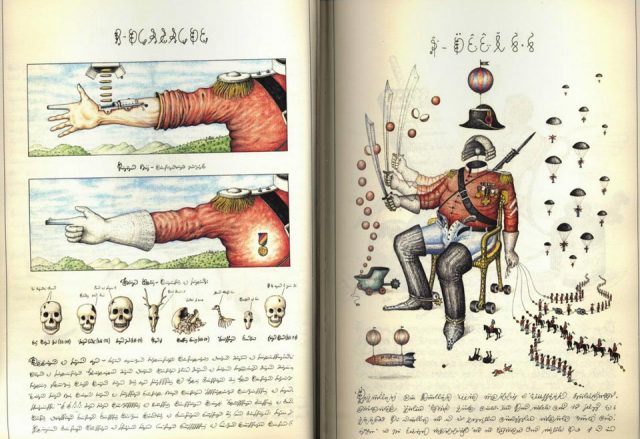 Codex Seraphinianus is considered by many to be a mysterious medieval tome, even though it was written between 1976 and 1978. It is known for both its author and its appearance, and it is not even unique, having gone through eight editions.

The mystery of this 360-page illustrated codex lies not in its creation but in its content since its cryptic text and surreal illustrations have never been deciphered.

The idea that sprang from the mind of Italian architect Luigi Serafini and the actual content and meaning of the strange codex that was produced can only be guessed at. Famous for his abstract graphics and mystical creations, the architect’s book takes readers into an unknown fantasy world that will fascinate and enchant but also astonish and shock.

Most like Diderot’s famous encyclopaedia, this pictorial encyclopaedia is divided into two major sections, 11 chapters within each, through which the life and figures of an unprecedented civilisation unfold.

The first part describes the natural history, creatures and phenomena of the imaginary empire, while the second part describes the inhabitants of the alien world, their way of life, their cities, their buildings and their history. Dozens of strikingly sensual and surreal drawings also cover subjects such as birth, death and sexuality.

Now 62, Serafini has not commented on his actions, so every word and brushstroke is a mystery. The pages, filled with cryptic text, are illustrated with Egyptian landscapes, distorted creatures and eerie scenes. The most daring panel in the codex, for example, depicts an act of love in which the lovers are transformed into alligators.

This masterfully crafted surreal encyclopaedia continues to puzzle experts and laymen alike. Codex Seraphinianus is seen by abstract artists as a fundamental work of art, a perfectly crafted joke, a brilliant parody of our ridiculous human world.

In their view, the codex is the work of an extraordinary imaginative mind, which needs neither decoding nor explanation. This, of course, has not convinced the linguists or the scientists at the Oxford University Bibliophile Society, who have been working for 33 years to crack the coded text, so far without success.

The text of the codex is based on an artificial alphabetic writing system that includes letters, symbols and numbers. The latter has only been deciphered, the author having numbered the pages according to the numbering system of 22.

The work of the scholars is made more difficult by Seraphinianus himself, who is even more mysterious than his book. According to him, he is guilty of a crime that emerges from his subconscious. It is at least as abstract as his drawings, which means that it will not be understood once deciphered as it is now in its coded state.

The mystery surrounding his writing and his book and its mystery has made UFO believers and researchers think. In their view, it is clear that the Seraphinian Codex is an encyclopaedia of extraterrestrials, an alien civilisation.

The author may have been inspired by UFOs, which is why the book’s symbolism is impossible to crack and why the strange creatures, alien landscapes and futuristic buildings in the illustrations are so eerie.